Mars has a lot of surprising things.

Mars has a lot of surprising things.

I've recently become a convert to Super Value Blends. They are flavored but not overly so, which seems to be what you're looking for. I haven't had Super Value's Cavendish Cherry, but it's on my list of things to try once I get through the 24 oz of SV tobacco I've recently purchased. You can't beat the price point. I find SV to be very satisfying tobaccos. So far, I've had the Black and Gold, Peach, and Buttered Rum. I'd give the cherry a try. You can buy it by the pouch and not by the 3/4 of a pound the way I do.

According to the write-up, which sounds similar to how I would describe Middleton's, "A bite-free Burley-based blend of select tobaccos with a sweet, zesty top note of ripe, sweet cherry. Many cherry blends are overly moist and bitey, but somehow Super Value Cherry Cavendish avoids this." I doubt the top note is overly ripe or very sweet----more like a hint of cherry that you are used to.

Thank you so much!! I will definitely order some of the Super Value Blend today. It sounds like the closest I have come to. I have tried 6 or 7 other tobaccos, but nothing has struck me yet. I did try the Pipes and Cigars match blend. It's not bad. The cut isn't quite the same as the Middleton's was and I think it might have a little more Burley in it. But I have only smoked Middleton's for the majority of my life, so I'm not very well versed at all in the different types of tobacco. But you're never too old to learn I suppose!!
Top

When I logged on to Milan Tobacco to order more they said it had discontinued. I called Middleton's immediately and they confirmed it has. I was worried this day might come when they stopped selling it in the 12oz tub and only pouches.

WickedLicorice wrote: ↑
Sat May 16, 2020 7:43 am
Hi there, new member here from Michigan!! I’ve been smoking Middleton’s Cherry Blend pipe tobacco for over 40 years and just found out it has been officially discontinued. I could really use some suggestions on alternative options. Most recommendations I get are other Cherry Blends, but to me Middleton’s has never really had a cherry flavor. I don’t know a ton about tobacco, but have heard that it was perhaps named after a street in Philly and wasn’t ever meant as a traditional Cherry tobacco. Any help at all would be much appreciated. I have tried some of the alternative blends made by the smoke shops as a replacement but haven’t been happy with any so far. Thanks again!!


Jr c8gars has it in stock .. buy as much as you can , I'd imagine . It's a blend I've smoked since 1980 and I agree there isn't a blend like it . I see it not available in most places but hopefully there won't be a cherry blend rush/hoard .... unless it's you and me ... and that would be fine

Man , Middletons just let it all go ... really , it's a brand owned by a large conglomerate , Altria, I believe . Hell , youd think theyd leep it alive but i guess so many newer smokers poo pooed it online that there wasn't much interest on it .Christ almighty , i remember a decade ago on the old psf .. the poo pooing it and sutliff took in general , both of which are great products . I had to fight the snobbery till they summited , lol

Wvsmokeshop carries a " match " , though I've never tried it . I'll order some and see what it's about

You're absolutely correct that it doesn't taste like cherry .The only thing I've had s8milar is somethingvthat fgt in Tampa made for the Edwards pipe shop .

Tell you what . If it's gone , which it probably is , and the match blend is no good , which may very well bevthe case ... I'll call Gordon of fgt and talk to him about what old school flavoring they used in Middletons Cherry and if he has sonethig close , maybe i can get him to blend us up some ? Gordon is s good guy and hugely knowledgeable... he woukd probably know a way to make a good similar blend


What a heart breaker

Btw , if you run out or get too low , pm me because i have some on hand

I went to JR Cigars, but it had already sold out unfortunately. I spoke with someone at Altria when I called and it took a transfer to a few different people to even know what I was talking about and then to find someone that actually knew whether it had been discontinued. It's too bad it is owned by a large conglomerate. I know a lot of people don't think much of it, but I am an all day smoker and I have really enjoyed it. Plus my family enjoys the smell. I tried the WV Smokeshop "match" a few years ago when there was talk of it being discontinued and don't remember liking it as well. If you find anything at all or are able to find someone to make a similar blend please let me know. I would definitely be interested. It's not easy to switch away from something I've been smoking for so long.

When I logged on to Milan Tobacco to order more they said it had discontinued. I called Middleton's immediately and they confirmed it has. I was worried this day might come when they stopped selling it in the 12oz tub and only pouches.

What did you end up getting ? 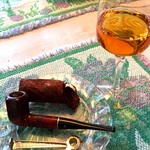 How is it in comparison ?
" Ya don't need a weatherman to know which way the wind blows " 13th apostle
Top
Post Reply
34 posts