I originally published the following on my old website Cake and Dottle in 2013. That site is no longer up, and this probably deserves to be available so here it is. I do want to make some notations before you dive into the original piece:
and now, here is the original article: 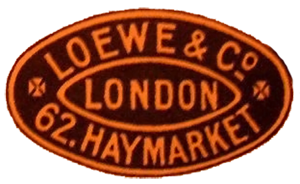 Loewe is my favorite pipe maker. How to rank them in terms of the many great London made pipes of their era? For me in the simplest of subjective terms, Loewe pipes from before the Civic era are like Comoy's, but even better. After Civic took over in 1964 I suppose the quality of Loewe was very comparable to a lower end GBD, which means they were still ok pipes but not up to previous standards. But those earlier pipes...to me they're just as good as it gets.

A shape catalog that is very, very English, outdated by today's standards for all but the most ardent Anglophile. Stems that mirrored the fantastic cut of a Comoy's hand cut stem, with the added bonus that the earlier pipes had stems using a softer vulcanite. Almost rubbery, like Charatan Double Comfort stems, or for a modern comparison, like the very soft ebonite Dolly Wood cuts Ferndown stems from. The one modern Dunhill I have that doesn't have a Cumberland stem has a similarly nice, soft vulcanite stem. Just a joy to clamp between your teeth.

There is not a ton of material around on these great old pipes, and there aren't too many of them to be had compared to the other English marques from the period. One thing I've noticed is most of the old Loewes you see look rode hard and put up wet, which tells me that their owners loved them and smoked them, which is the highest praise any brand can gain.

The following is an outline for placing your Loewe pipe within an approximate range of years, gained from what little I've found on the web and the experience I've gained from buying them.

dating via hallmarks on pipes with silver

underside of shank - shape name, Made in England (encircled) this may just have been on export pipes

*Prior to 1955 Loewe had no series, stamping only the shape name on the underside of the shank. I have seen one Military marked with the series name Haymarket, which does not appear in any Loewe literature I've seen and could have preceded the introduction of series names for a brief period.

**Loewe had three special grades, in descending order, Extra Grain, Straight Grain and Special Grain. These grades superseded the shape name on the underside of the shank. These were Loewe's finest pipes and produced in very limited numbers. These grades continued either up til or into the Civic era. They are the Loewe equivalent of Comoy's Specimen, Selected Straight Grain and Blue Riband series. I do not know whether these pipes were made prior to 1955 or only from 1955 and on.

***the original three series are introduced in 1955; Centurion, Original and Old English.

In the case of Extra Grain, Straight Grain and Special Grain pipes, there was no shape name on the underside of the shank. These pipes featured the grade instead and an encircled Made in England underneath.

Tricky because the stamping is exactly as late Haymarket era pipes. We have to look for the new series names on these pipes to know they're from this period, but that doesn't always work because Civic continued to produce Originals and Centurions during this time.

Civic era Originals and Centurions can be identified by the step in their tenons.

Some time during the Civic era, the three series were expanded to six, with the addition of Standard, Spigot and Mounted series. I have also seen several Civic era Loewes stamped with the series Great Britain, but I've never seen it mentioned elsewhere. I do not know how long the original three series continued to be stamped on shanks and it's possible there are Civic examples but I haven't seen one.

In addition, the collector familiar with Haymarket era pipes will instantly see and feel the difference in quality these early Civic era pipes present. Think of these pipes as transition period Barlings, ok but nowhere near up to previous standards.

****dating via hallmarks on pipes with silver

The Lucite and Filigree series were introduced during the Cadogan era.

These pipes also have the Comoy's encircled Made in England, a dead giveaway for Cadogan Loewes.

****Les Wood did all of the silver work for Cadogan from 1979 to 2007, and Loewes with silver bands made during this period received hallmarks, facilitating easy dating . The inclusion of hallmarks was at the request of Cadogan, as Les does not hallmark his own pipes or the work he's done for Dunhill, Ashton and Upshall.

During the Haymarket era Loewe produced seconds under the stamping Haymarket pipes. These had two digit shape numbers and look to be a nice quality second, comparable to how close Royal Sovereigns were to the Orlik propers they were second to.

Later, I believe during the Civic stewardship, Loewe produced seconds under the Beefeater stamp. These turn up more frequently and you see them on eBay from time to time.

As more or better info becomes available I will edit this post, and please, if you note anything incorrect contact me so I can make the necessary changes.

Yuri and Co. at Pipedia have really fleshed out the Loewe page there and it contains a lot of info that wasn't previously elsewhere.
https://pipedia.org/wiki/Loewe_%26_Co.

Lastly, here's a link to an album of my Loewes.
https://imgur.com/a/cxYNU

Thanks for the history lesson!

Tubby Pot, Woodstock and the square shanked pipes are my favorites! Thanks for sharing!

This post by Billy Joe liked by (total 2):
sisyphus • Wildcat