The following is an article that I wrote on the now defunct Cake and Dottle website in 2013. It deserves to be somewhere, so I am reposting it here. I have renamed it from the original Dating Orlik Pipes, as the following only applies to 1950s to 1970s pipes. It is rare to see earlier Orliks other than the gourds and the odd silver mounted WW1 era pipe, and they had different series prior to the 1950s. I have one, a Sterling, which seems to me to be a 1940s era, 1930s at the earliest.

My updated thoughts on Orlik is that I just love them. You have to get an Old Bond Street, a Supreme, or a Virgin, because their lower lines may or may not have a molded stem, and they'll certainly have lesser briar. They're solid, the mouthpieces are first rate, and I put them right up there with Sasieni Four Dots and Loewe in terms of quality. Their billiard shapes are maybe the best. And now on to the original, slightly updated content: 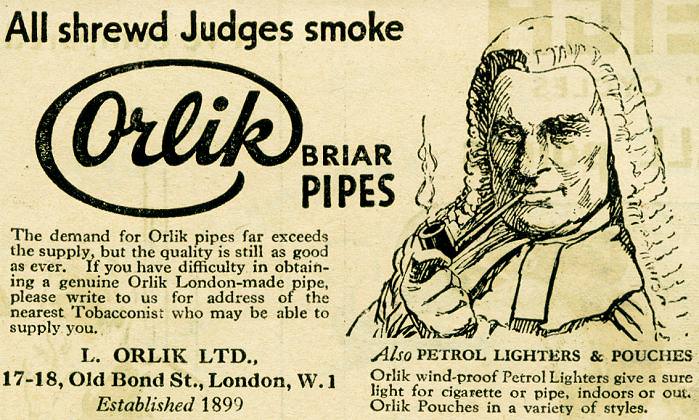 I started collecting Orlik pipes sort of by accident. They aren't a brand that receives a lot of forum lip service, and they don't turn up all that frequently on eBay. I got my first, and I was so impressed with the quality of the pipe I went into an Orlik PAD frenzy. Somewhat plain, nothing extraordinary about the shaping, grain nothing to speak of, but there was just something about the cut of their billiard and Lovat and the solid feel of them. They smoke wonderfully, and if I had to pick a single billiard to represent perfection in the wide, wide field of English billiards, my money is on the Orlik shape 20.

Long before the name Orlik became a property of the Danish tobacco concern we're all familiar with, the name stood for quality London made pipes. Founded on Bond Street in 1899 by Louis Orlik, the company produced pipes of similar quality to Dunhill, Sasieni, Barling, GBD, Loewe and Comoy's until 1980, when they were acquired by Cadogan. Like the other hallowed marques acquired by Cadogan around that time, production was moved and quality took a nose dive. These post-1980 pipes became of little interest to collectors.

In order to find Orlik pipes possessing a desirable pedigree, we'll look to the series that Orlik produced while they were still an independent concern in the 1950s to 1970s range. The series code precedes the shape number in the stamping on the starboard side of the shank. Unlike some brands that have separate series for sandblast pipes, Orlik blasts were graded and stamped with one of the existing series, but not all series had sandblast representatives. Orlik appended an X to the series stamping on these blast pipes, so that an Orlik Supreme billiard shape number 20 normally stamped T20 would be stamped TX20 if in blast finish.

The following list is in descending order of quality, with the series code in parentheses.

Old Bond Street(A)(AX)
Smooth or blast. Orlik in cursive in stamping. Straight grain more often than not on smooths.

Turbo(U)
had aluminum shank extension that either altered airway into weird turbulence or acted as cooling fins, screw-in tenon

Hurricane
has the flip over bowl shield for smoking in the wind. I think I've only seen these as Canadians, stem cut unknown

Proper Orliks from the pre-Cadogan years will have a brass inset "O" in the stem, or sometimes a brass X on the Corona series.

The following series are not referred to in the readily available Orlik literature and are not mentioned in the Pipedia entry. I have observed examples of these and they appear as the 60s era Orliks I own in most respects, complete with distinct series codes. I am tentatively accepting them as proper London Made Orliks, but don't know where they fit into the above hierarchy. There is also the possibility that for legal reasons Orlik was forced to rename series for specific markets, and these might be incidents of that practice. Another possibility is that these new series were introduced sometime in the last decade of Orlik's pre-merger years, and served as replacements for discontinued series. I will edit this when and if this issue becomes clear.

I am arranging these in two groups, those with sans serif font in nomenclature, indicating earlier manufacture:

and those using a serif type font in nomenclature. These are pre-merger pipes made in the last decade or so before Cadogan acquired Orlik, provided they do not have the Comoy's encircled Made in England stamp. The quality is very good.

Golden Contrast(GC)
a honey colored contrast stain, like a lighter Comoy's Tradition. Very nice until you get to the molded stem

Orlik did not always stamp the series letter next to the shape number on their pipes, but it was the norm. A sure way to spot a post-merger Orlik is that it will have the Comoy's Made in London in a circle with England in a straight line underneath. These are not the pipes you're looking for, move along.

The following series are Orlik made, but not sold as full fledged Orlik pipes. Similar to how Comoy's stamped Guildhall and Everyman pipes as "by Comoy's" or "made by Comoy's". I have had one Prince Regent in my hand, and it was stamped Prince Regent on the port side of the shank and Made by Orlik on the starboard side. I found the Prince Regent to be very much of the same quality as a Comoy's Everyman, and an Orlik De Luxe with a molded stem attached reminds me similarly of a Guildhall pipe.

The following series are probably of little interest to Orlik collectors but I am including them for the sake of completion. In any event, if you picked up one of these pipes it would probably share the superior smoking qualities of their better lines, with obvious trade offs in the interest of producing a lower priced pipe.

We pick up where we left off above, again in descending order of quality with the series code in parentheses:

Lastly, Orlik had only two seconds lines I am familiar with:

Royal Sovereign these appear as Supremes or Coronas with fills. The stems are hand cut or molded on a case by case basis, and only lack the brass O.

There is little to no info available on Orlik pipes. This is what I've been able to amass since I took an interest in these pipes. As time goes by and specifics become illuminated as I dig up more info, I will update this article to represent the best knowledge I have on these pipes.

Love these histories. Thanks for sharing! Would you mind posting a few pics of your favorites?

This post by Wildcat liked by (total 2):
Fr_Tom • Maynard

Wildcat wrote: ↑Fri May 04, 2018 3:31 pm Love these histories. Thanks for sharing! Would you mind posting a few pics of your favorites?

These are my Orliks. I am particularly fond of the billiards and Liverpools.
https://imgur.com/a/Ml0SD

This post by Wildcat liked by (total 2):
Fr_Tom • Maynard

Beautiful pipes. Always been a fan of Orlik pipes, haven't gotten any yet.

I did a Google search to find some more information on Orlik pipes.

I found a silver hallmarked billiard from 1923 that has Louis Orlik mark on it.

I've put the details on the gentleman pipe smoking page on Facebook.
Here's the link.

I hope it adds some information to the history you have written.

Probably should have pointed out it's not a for sale post.
I was actively seeking more information on the pipe.

it is really hard to qualify which pipe is better than which. I have some experience with the London made brands and collect several of them. You may know from my posts that Loewe is my absolute favorite. I'll state here that a good Orlik Supreme or Old Bond St is very, very close if not equal to a Loewe Centurion or special grade. From me there could be no higher praise. Better grade Orliks remain one of pipe smoking's best kept secrets.

Here's a couple of pictures.
Happy to upload more if you would like them. 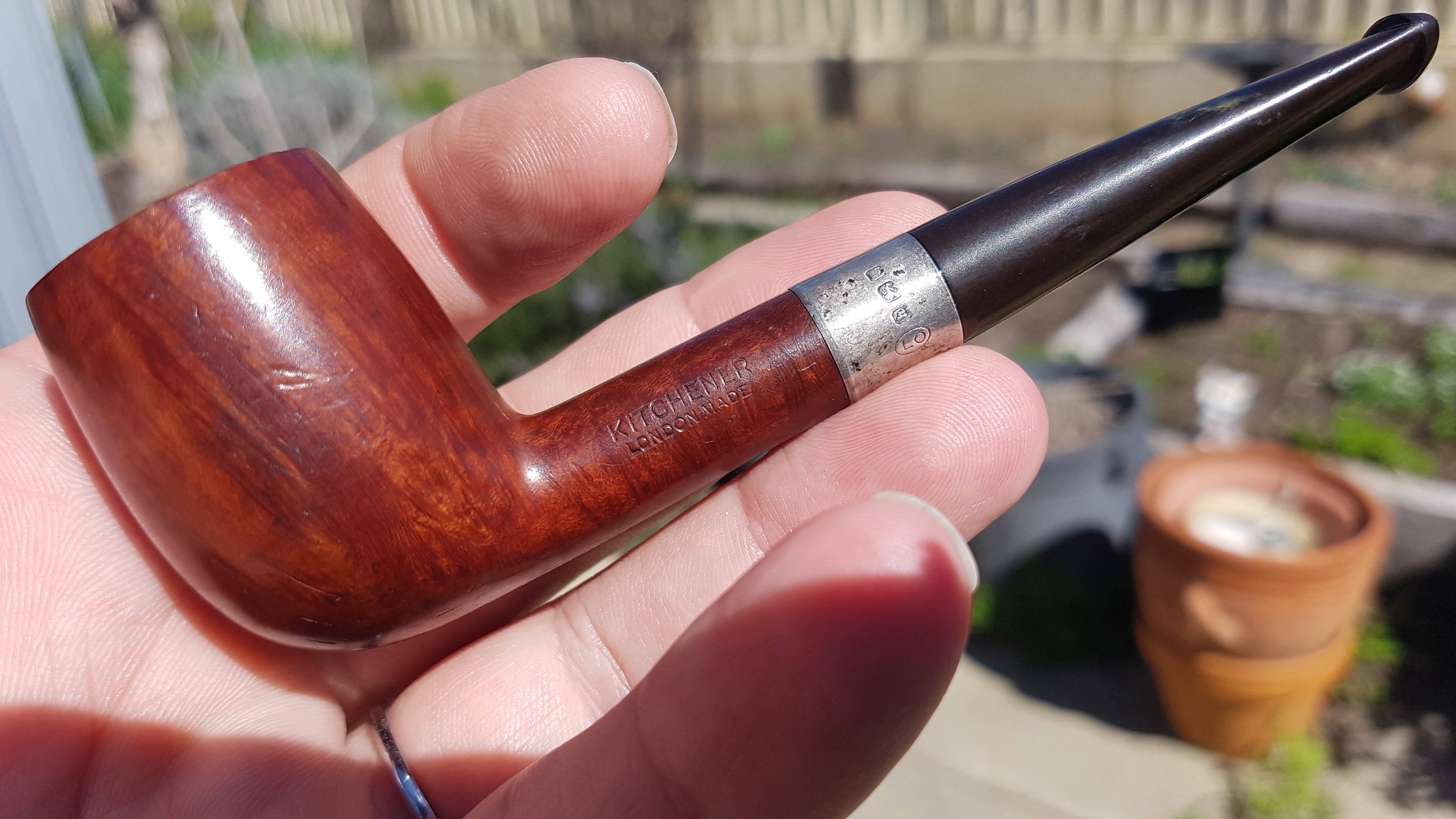 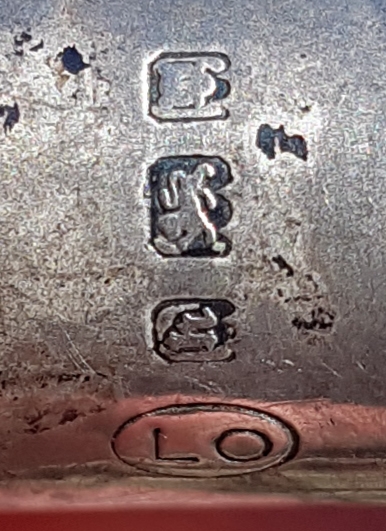 This post by XSorXpire liked by (total 3):
Maynard • Fr_Tom • sisyphus