Meerschaum pipes aren't really considered a rich man's pipe, nowadays, though they do have the connotation that they are elite. Never ghost, low maintenance, intricate carving, don't drop it, keep it in a case, whatnot. The myth that you have to wear a glove when you smoke it has been debunked.

A brylon pipe is a working man's meer----smokes the same way, with some over-exaggerated downsides. Unless it is at ground zero of an atomic blast or the focal point of a meteor crash, a brylon pipe is indestructible.

A clay pipe is as light as a butterfly and it works hard like a bee. Like most things, a clay pipe will never last forever. That's not what it's made for. It is made to be broken, eventually, if only at the bit for the next guy who wants to smoke it. It is a transitory disposable thing by design. That's why it's cheap.

Here is my newest clay pipe. I didn't take this photo to subliminally influence your political opinions. It just happened to the page of the WSJ I was reading at the time. 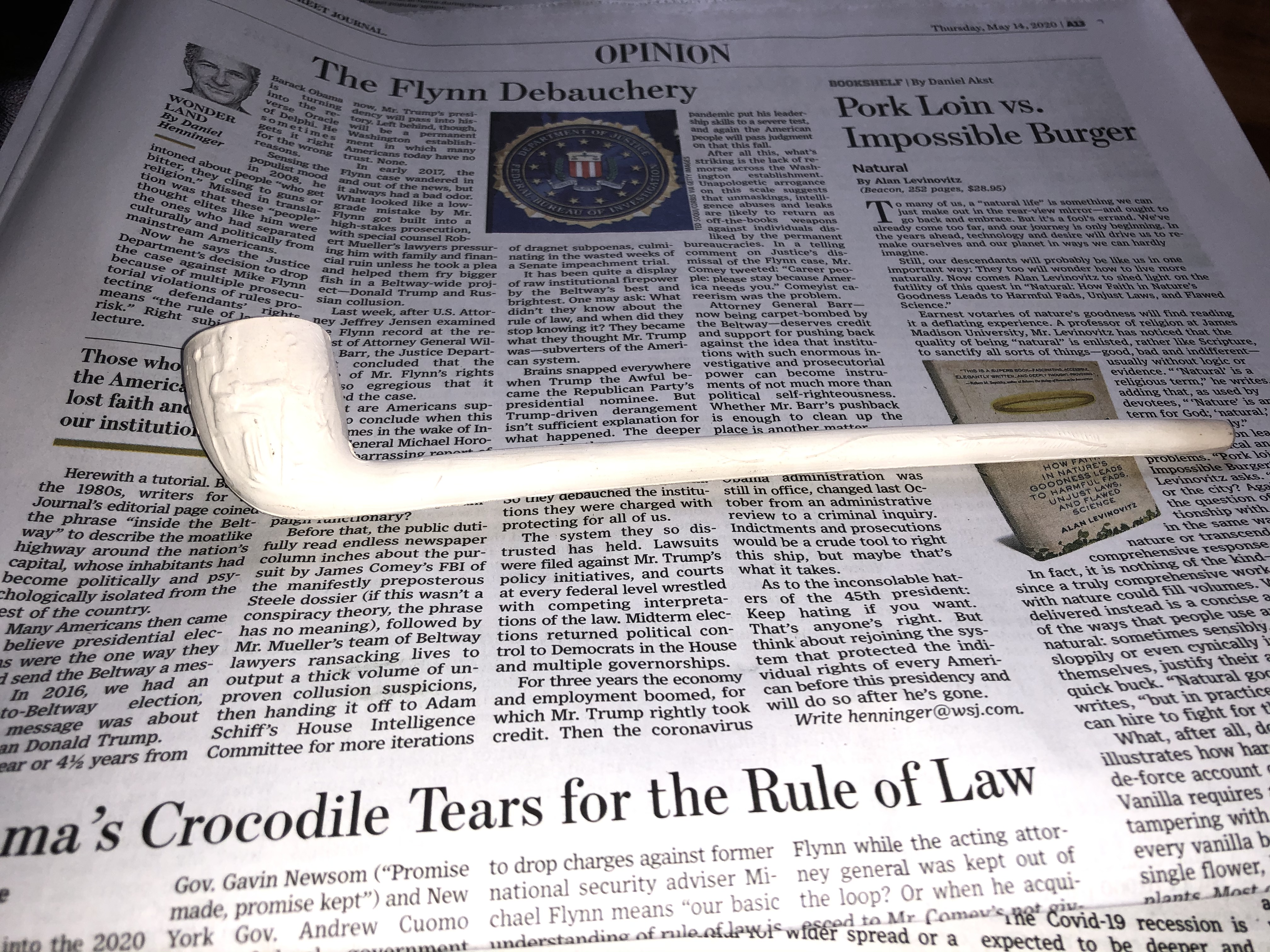 I like a clay pipe. That's why I bought another after my first one broke. I have my reasons. I think they are good reasons, too.

My first clay, the first one I ever owned, lasted a few months, let's say 300 smokes. The bowl broke off from the stem while I was tapping it against a cork knocker. I'm not gentle with anything, so I blame myself.

Here is a picture of the remnants of that first clay. Unfortunately, I threw away the stem last month. I don't know why except that it was useless. Don't ask me why I've kept the bowl this long. It still has unspent tobacco packed in it. I found it under a pile of papers on my desk. Good save. Here is the picture without a flash compared to the new clay pipe: 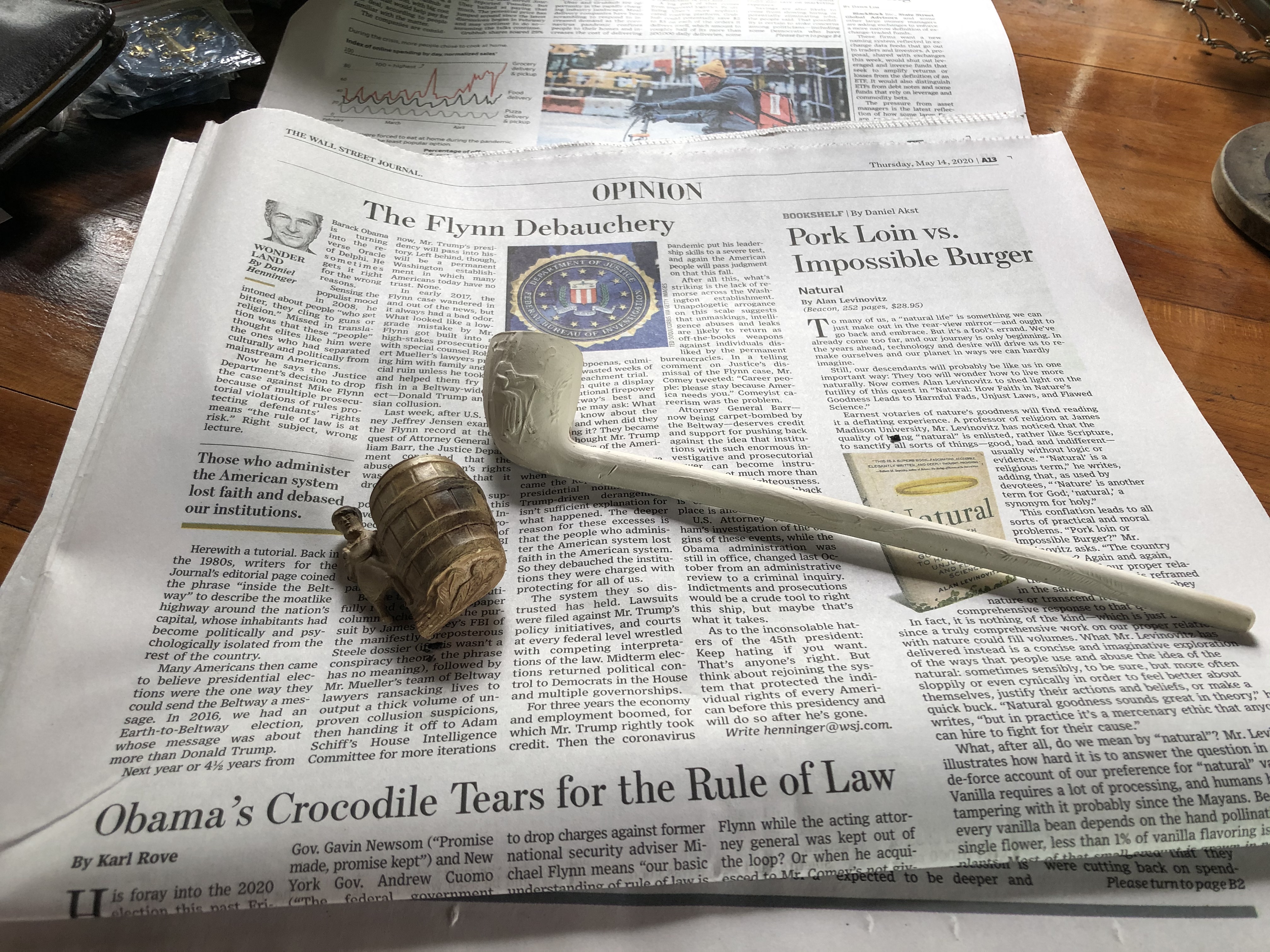 Here is a picture I took using the flash: 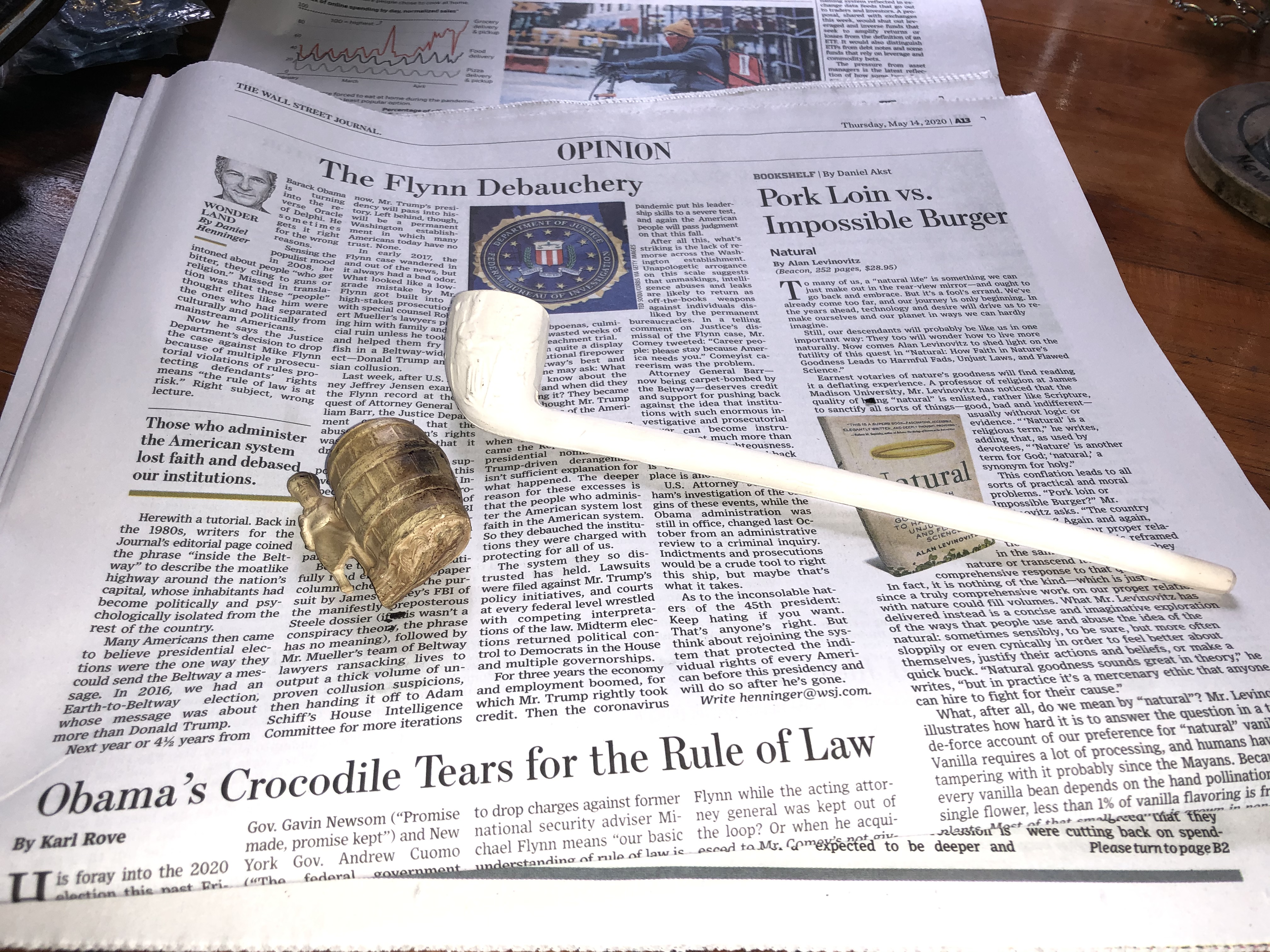 Notice the detail of my old clay pipe. It's a little man standing next to a wine barrel as tall as him. His feet used to be on the stem. The stem broke off. Now, he only has one foot.

That pipe was one good smoker. That's why I bought a second clay for my collection.

I'll have to get a clay sometime. Where did you get this one...?

I'll have to get a clay sometime. Where did you get this one...?

A clay bowl burns hot. There is no use trying to touch it mid-smoke unless you want to burn your fingers. A clay pipe is held by it's stem when in use.

The wine-stomper clay, my first clay, had a stem about 4 1/2 long. It was long enough. My new pipe has a stem that is six inches long: 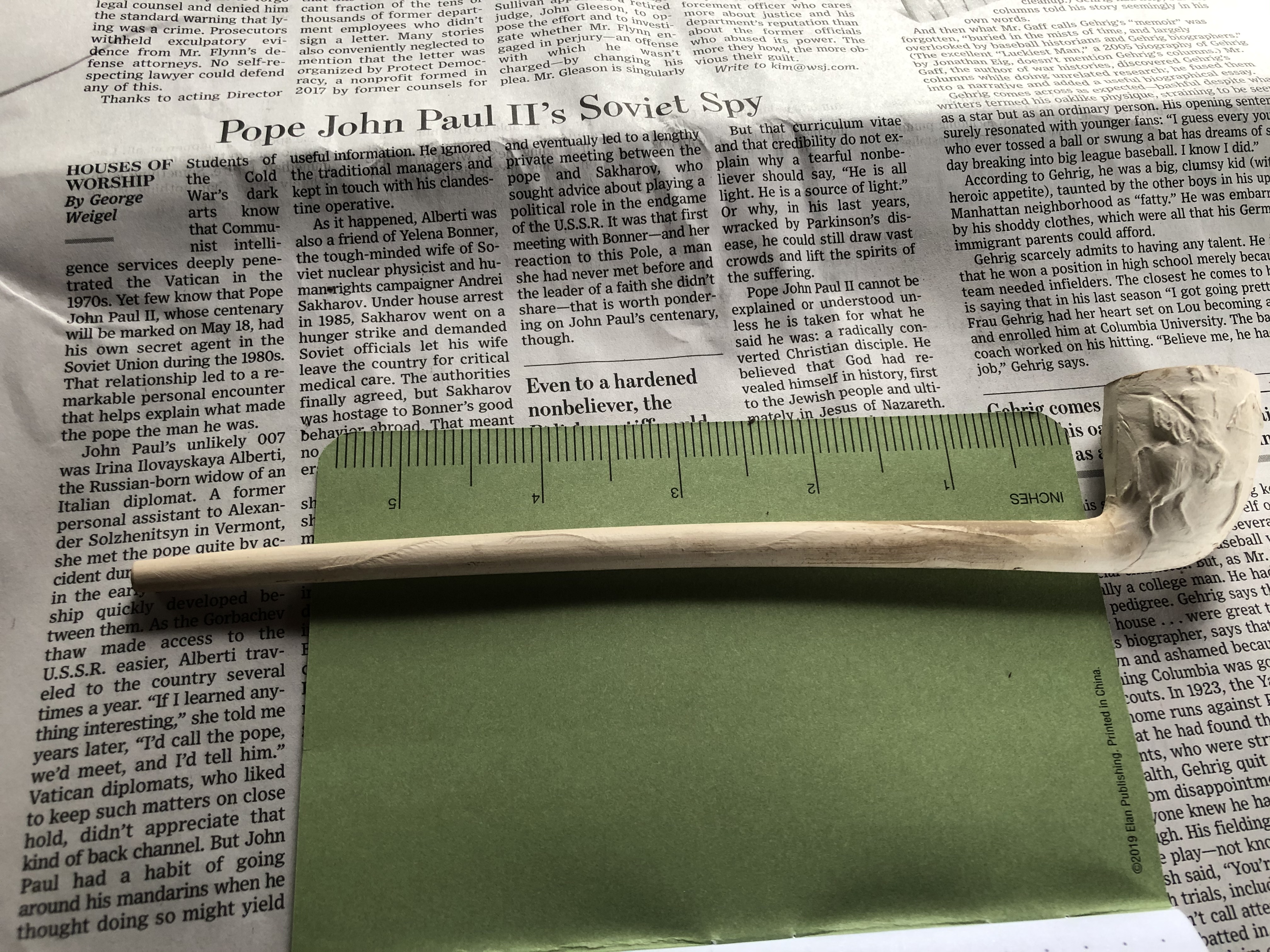 I prefer a sitter, or, poker pipe, one that I don't need a rack to rest it in between sips at the bowl. That said, I have yet to see a clay pipe that sits upright when put down on a tabletop. I have a pipe rest where I put the pipe if I need to put it down. Unlike a regular briar pipe, where I would put it down with the bowl facing me, with a clay pipe, for convenience, I position the pipe rest facing away from me, i.e. the bowl is on the other side of the rest so that I can pick up the pipe easily by its stem.

Here is my preferred method of holding this new clay pipe. Pro tip: 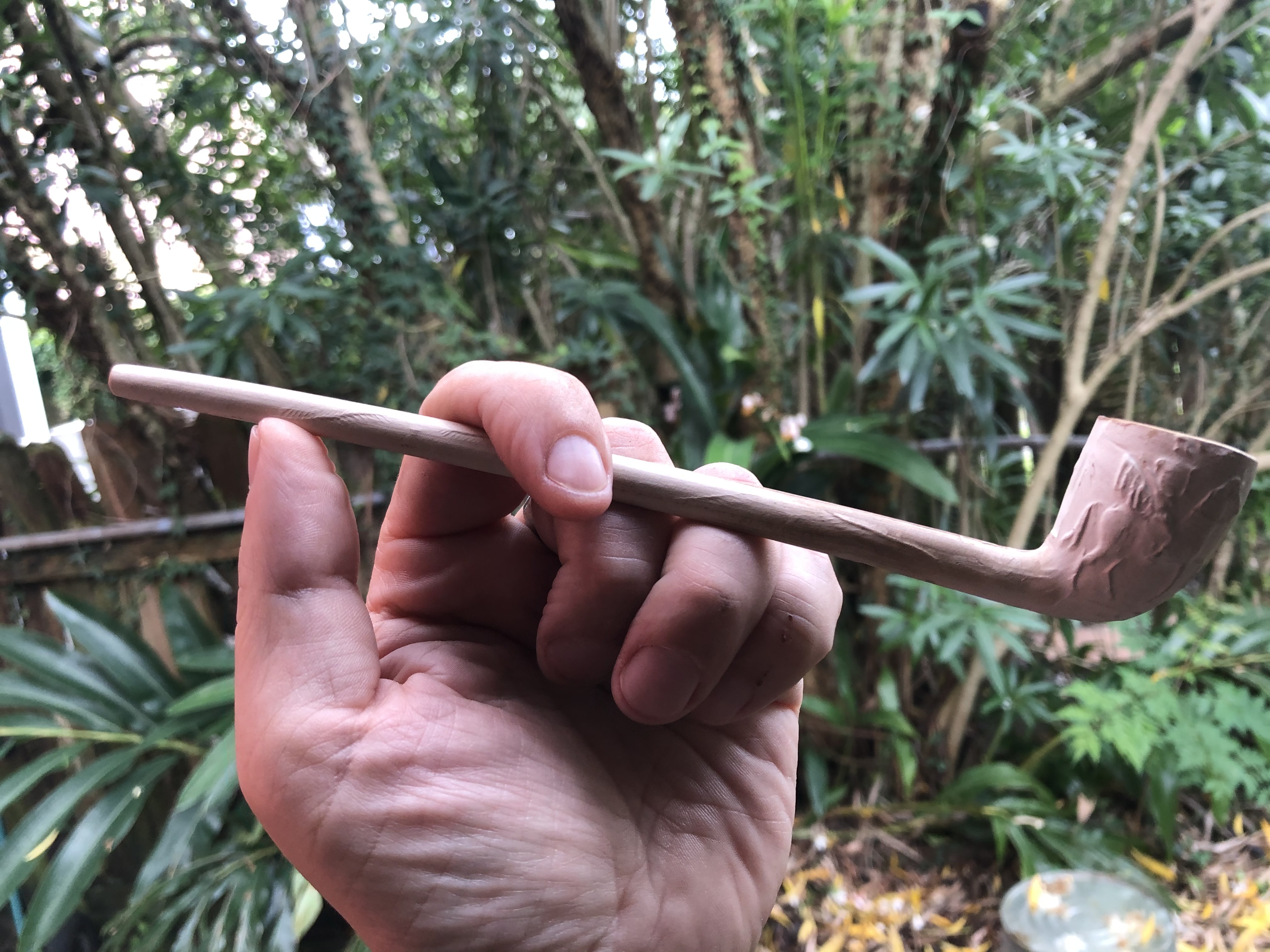 My first clay broke after about 300 smokes as I was knocking the bowl against a cork knocker. I wasn't doing anything I hadn't done 300 times before. It just broke off without fanfare.

If you look at my last post, the detail of the wine-stomper clay had a lot of detail. That is what differentiates the price, how much detail is gotten from the casting. The quality of the clay between the first pipe and the second was negligible. The difference in detail is what mattered, and, that jolly little grape stomper was a joy to look at as I smoked the pipe. The new pipe has details, too, but they are as blurry as an old movie. I'm not going to bother to post photos because they won't tell you anything that I'm not going to tell you here.

One side of the bowl has a man sitting on a chair who looks like a pharaoh holding a bishop's crozier. The other side has a man on a horse, who either has a shield or a back of laundry on the back of his saddle. The stem has four feathers (I think) along its length on either side. Whatever all of this is supposed to represent is irrelevant because unlike a meer carved in the shape of a skull or a naked lady, it is immaterial for a pipe that is going to last 300 smokes before breaking.

I have been wanting to get a clay. https://www.johndenglertobacconist.com this where I will buy from.

mrpipster wrote: ↑
Fri May 15, 2020 2:46 pm
I have been wanting to get a clay. https://www.johndenglertobacconist.com this where I will buy from.

That's a nice looking shop, Pip. You should do it. We can compare our experiences.

I've been smoking my new clay for a couple of days now, let's say 25 bowls. I think I see why the the bowl broke off the stem of my first pipe.

The stem of this pipe is getting very dark at the juncture where the stem meets the bowl. I think the stem at that point is absorbing most of the moisture and tar. The bowl itself remains white but the stem is getting progressively more brown from the bowl up to the bit.

On the first pipe, I wasn't sure if it was the tobacco doing it or my dirty hands. Now that I am paying attention to how I'm using this pipe, I'm sure it's the tobacco with its tars and whatnot being absorbed by the clay. It is very interesting to see it happen right before my very eyes.

My theory is that the stem gets weaker where it meets the bowl because that is where most of the condensation happens to provide a cool, dry smoke, and, all that chemical activity weakens the clay at its most important point. I don't want to get all scientific. I'm just a simple man, but smoking a clay tunes you into what is happening in the pipe. It is pure tobacco flavor the whole time. You've never tasted anything like it, which is why clays are recommended to taste blends before you buy them.

Get one. You won't regret it. Just don't overpay. The pipe is going to break at some point, sooner or later. I'll post some pictures tomorrow.

This post by Whalehead King liked by (total 2):
MikeDennison • Bamarick

A clay is not a clenching pipe, at least not like you clench a stem of vulcanite or ebonite or one of those MM amber stems. The stem of a clay pipe is even harder on your teeth than an acrylic stem.

It's not that a clay stem is hard, though it is, it's that it isn't comfortable. Chomping down on a clay stem with your bare teeth will wear down your enamel. I don't know how old you are, but I'm of an age where I'm trying to preserve my choppers.

Smoking a clay requires using the lips. I use my teeth, sure, but I keep my lips between my teeth and the pipe. Since it's just for a sip of the pipe smoke, it's not like I look like a dummy walking around with my lips tucked into my mouth. A clay pipe isn't a clencher, it is an accoutrement, a way to deliver momentary pleasures that will last a long time until the next puff. 'Nuff said.

Smoking a clay requires a different technique than most of us are used to. It is totally worth it. Look at old Dutch Master paintings. All they smoked were clay pipes in their taverns and gardens.

The most common finds when archeologists dig up latrines are broken bottles, broken crockery, and discarded clay pipes. Heck, if I dropped my pipe in a privy, I wouldn't be quick to fetch it out of the outhouse hole. Not at this price point.

Smoking a clay connects us with our roots as pipe smokers, whether people who smoke them realize it or not. And, bonus, they provide an excellent, cool and dry smoke without advertising it. No maintenance. These pipes existed and were popular, worry-free, long before pipe cleaners were invented. Pipe cleaners weren't needed when all anyone smoked were clay pipes.

This post by Whalehead King liked by (total 2):
MikeDennison • Bamarick

My clay is developing a patina from its inside as the moisture and tars get absorbed by the pipe. It starts at the heel of the heel of the bowl and progresses up the stem.

I never run a pipe cleaner through it. No need. The stem is long and the draw hole is narrow. The Falcon pipe cleaners I have will fit in the stem but they won't make their way to the end of the stem's end. No need, no worries.

This clay pipe requires zero maintenance. Of course, it will break some day if I drop it but I'm along for the ride. I like it. The smoke is as pure and tastily refreshing as a mountain spring far from civilization. It's refreshing.

Dang it WK! Now I have to make the drive to https://www.johndenglertobacconist.com/ and pick one up. Thats ok though as its only 5 miles from where I work.