The wife and I have been married 36 years. For the most part it’s been a pretty easy marriage, we’re well suited. About the only thing we argue about lately is my pipes. She has no problem with me smoking and collecting them, she just doesn’t want to see them. I see them as art and they please me. She obviously does not. I argue that a middle aged man can get into far greater trouble than a pipe habit, and the pipe bug is about the only vice I have (some fishing and hunting in season, but I claim that as therapy). This doesn’t alter her opinion that my smelly old pipes (as she calls them) should be stowed away out of sight somewhere. There’s no accounting for taste, but then she married me, so I didn’t expect much from her in the Good Taste department.

We have this curio cabinet in the living room that sees all manner of seasonal bric a brac come and go. Sometimes it looks alright, sometimes, especially at Christmas, it looks like a thrift store threw up in it. I deftly planned an insurgence with intent to insinuate my pipes into the ghastly display and bring a touch of masculinity and pleasantness to the situation. I polished up my Petersons, with their nice shiny silver collars, and placed them on a nice rack in the cabinet. Amazingly she put up little resistance. I was in!! A while later, after the holiday nightmare had been stored away and during a lull where she’d left a couple spots in the curio vacant, I slipped in a pair of pipes propped up jauntily in their open boxes. Again, no resistance.

Of course this fueled my pig greed for more, but keeping my senses and knowing the enemy, a brilliant plan was launched. New silk flowers and a tasteful display box for a small number of sandblasts, all layed out in geometric proportion in the curio. Today was the day. The wife left early with the granddaughters for a daytrip to San Francisco and as soon as they left I leapt into action. It may fly, it may be too much. I think I’ll hide the key so she can’t open it, at least for a while. Let her get used to it. Wish me luck.

The top row is her precious China teapot and the old family bible, not touching that. Everything below is fair game! 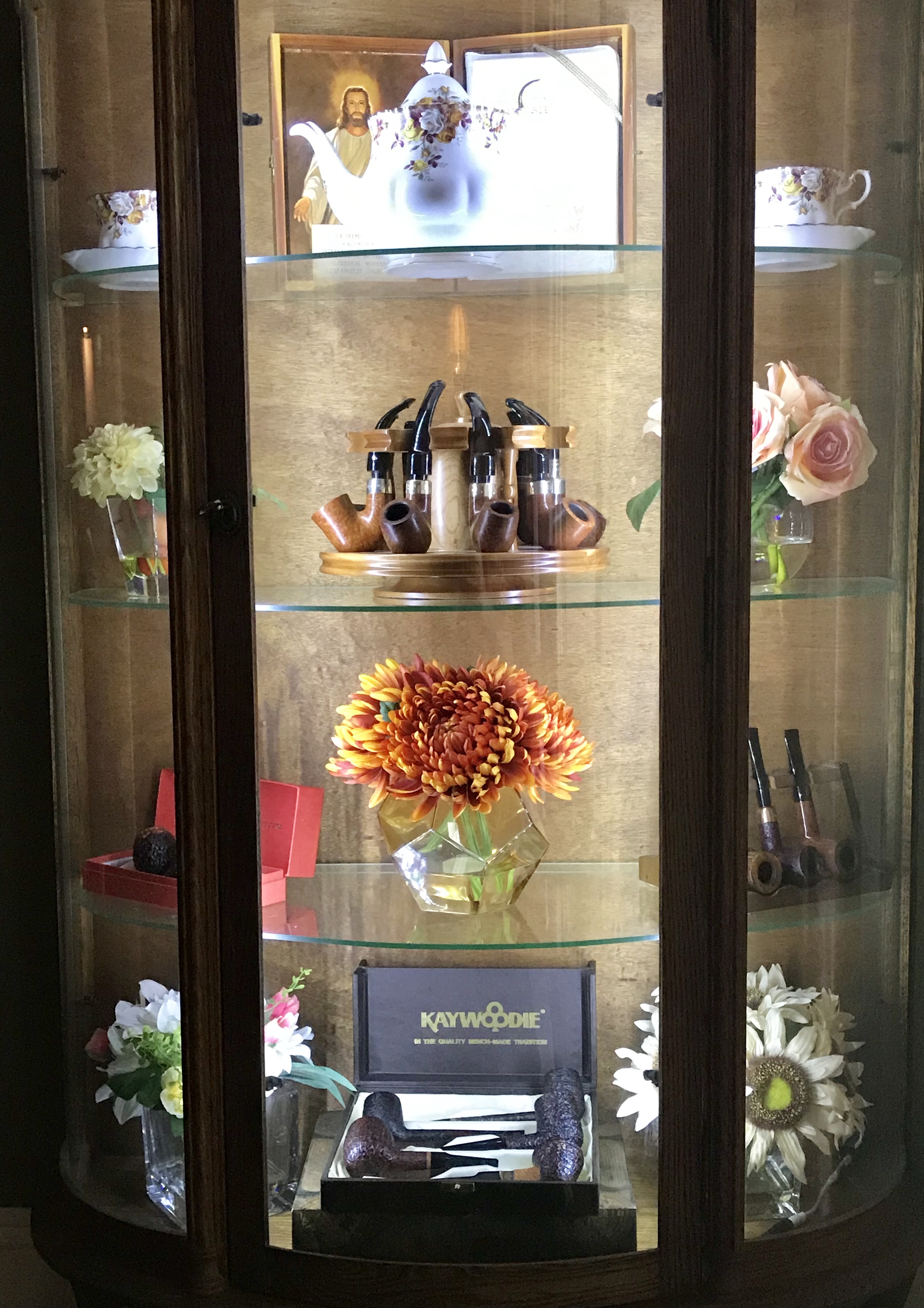 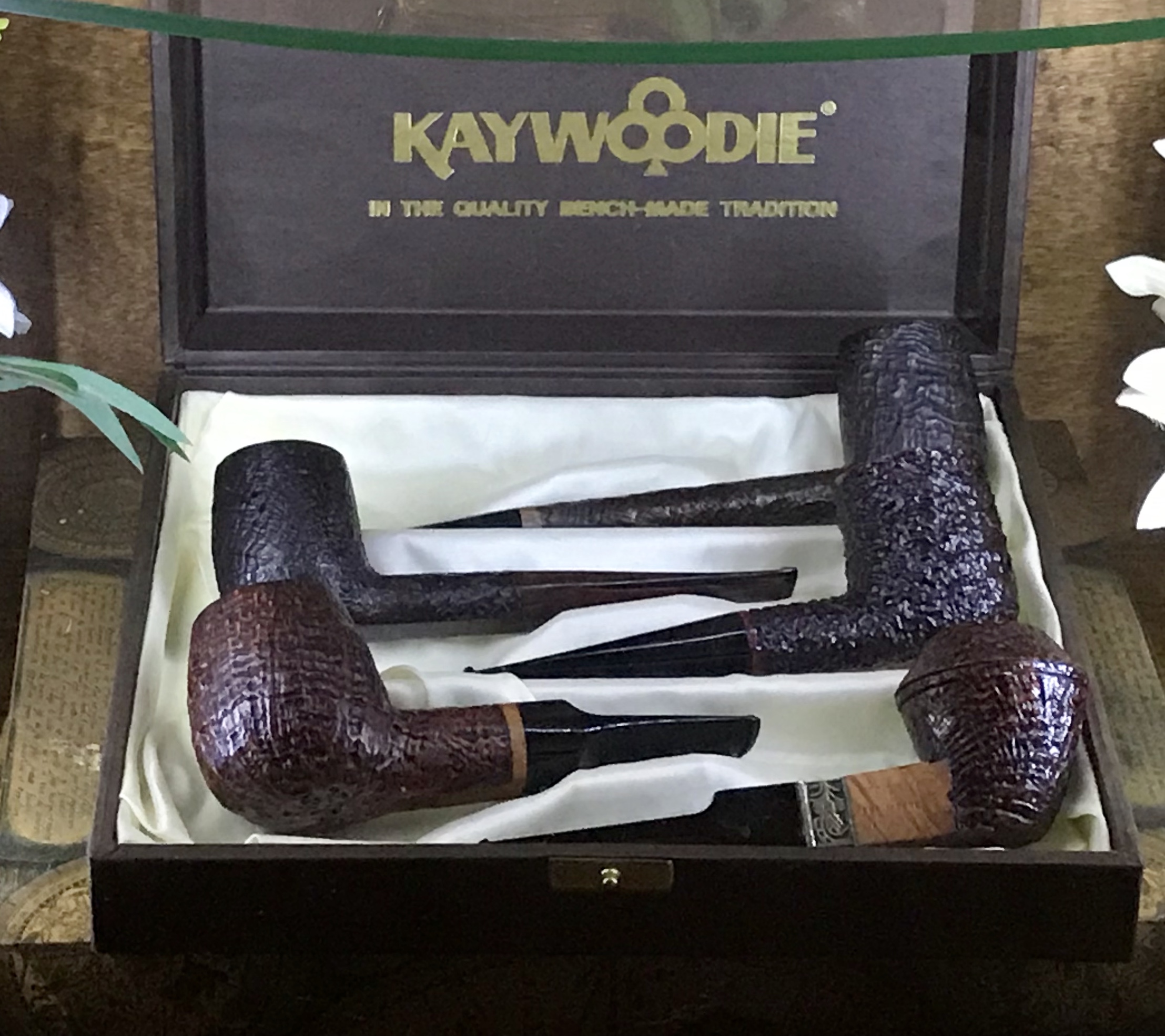 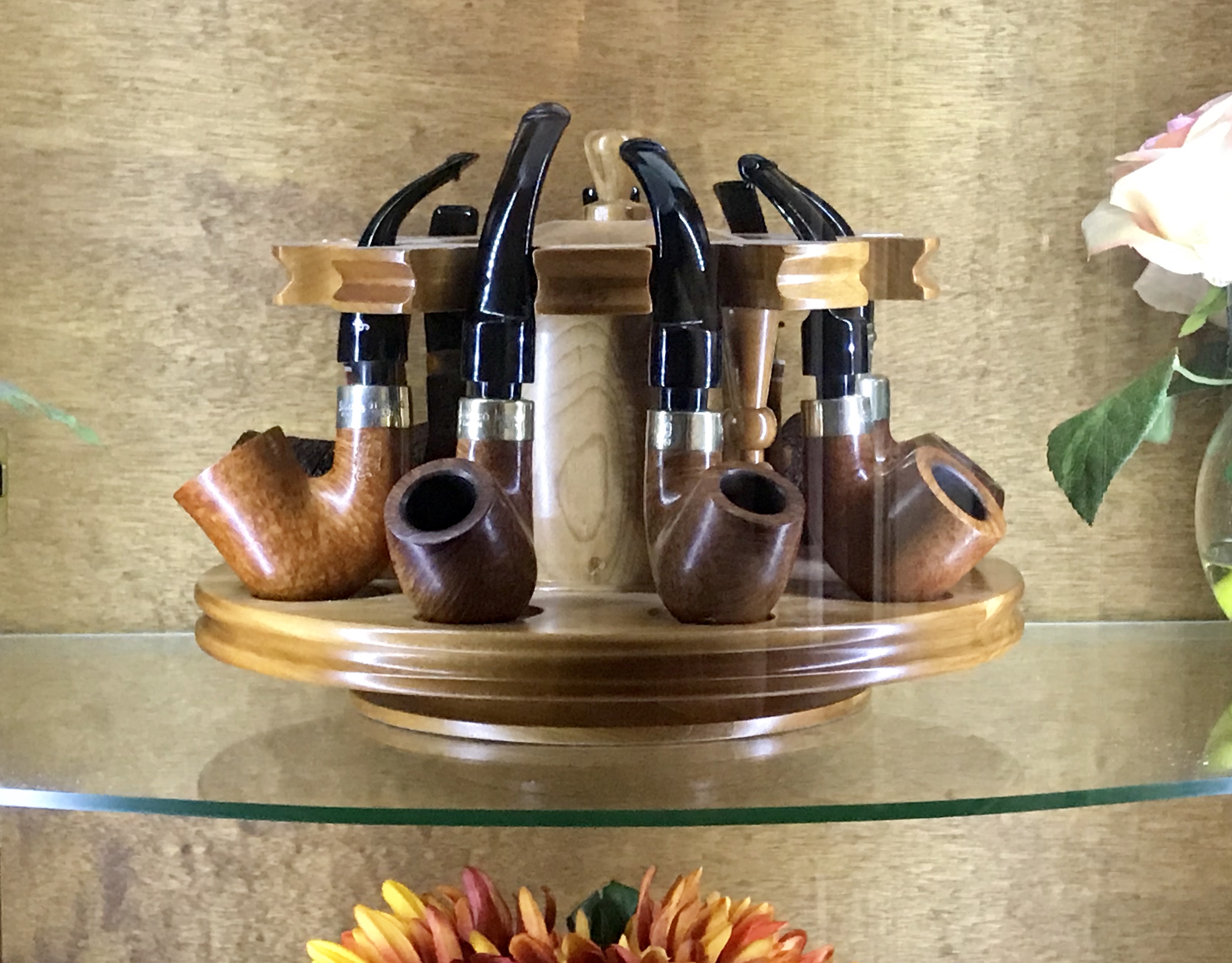 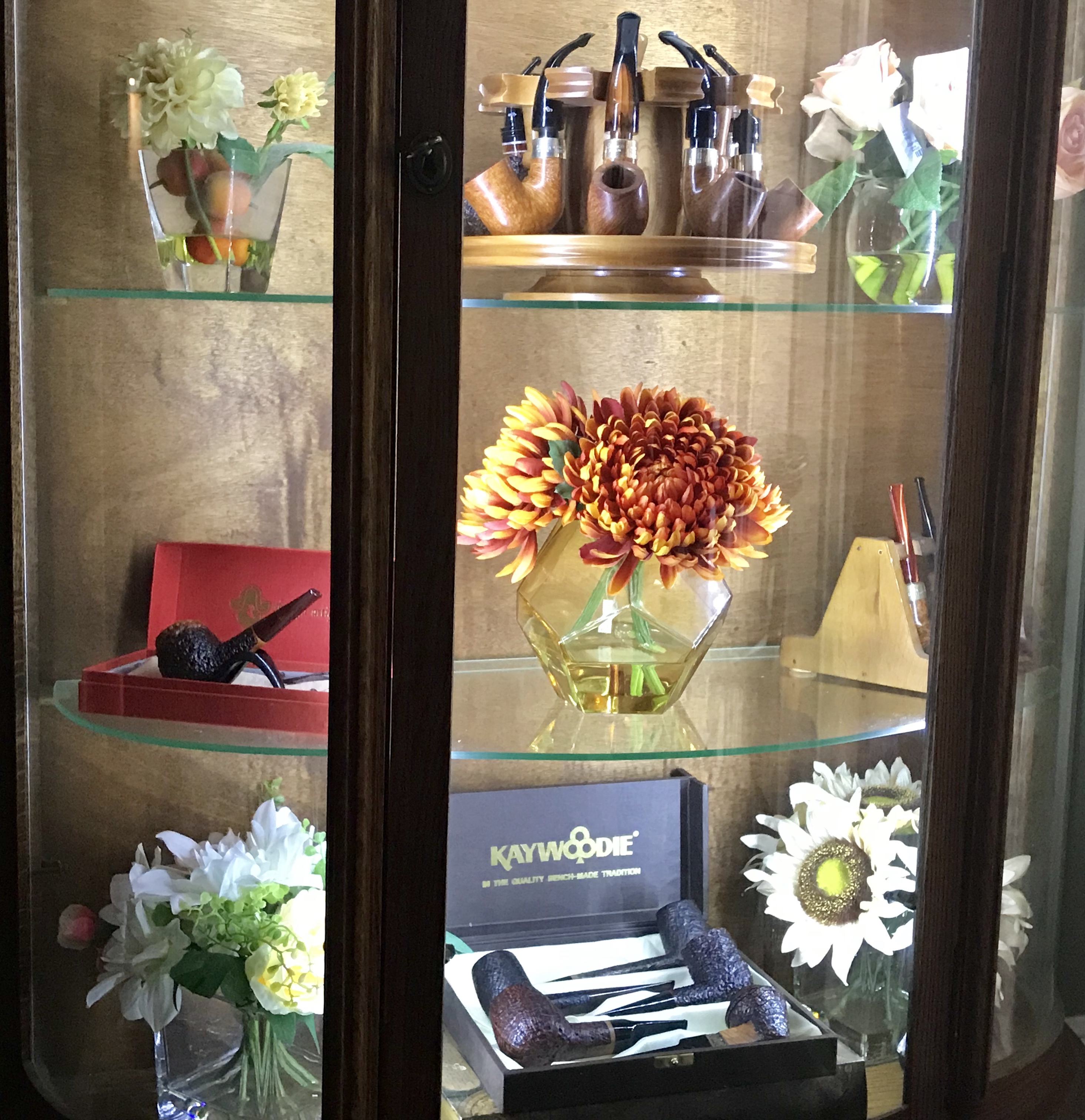 Nice! Always better to beg for forgiveness than to ask for permission. I'm lucky, my wife wants me to get a large cabinet and display them

Looks great! I think you can fit a few more in there.

Said the little devil on one shoulder....

Fantastic thread
My wife is down on the whole deal, but gave up a while back and just leaves me to my own devices
Good luck with the new and improved display

Ha! I keep mine in an old humidor. And proud to do it! Except for the 17 I culled to smoke for the foreseeable future they are all still there. 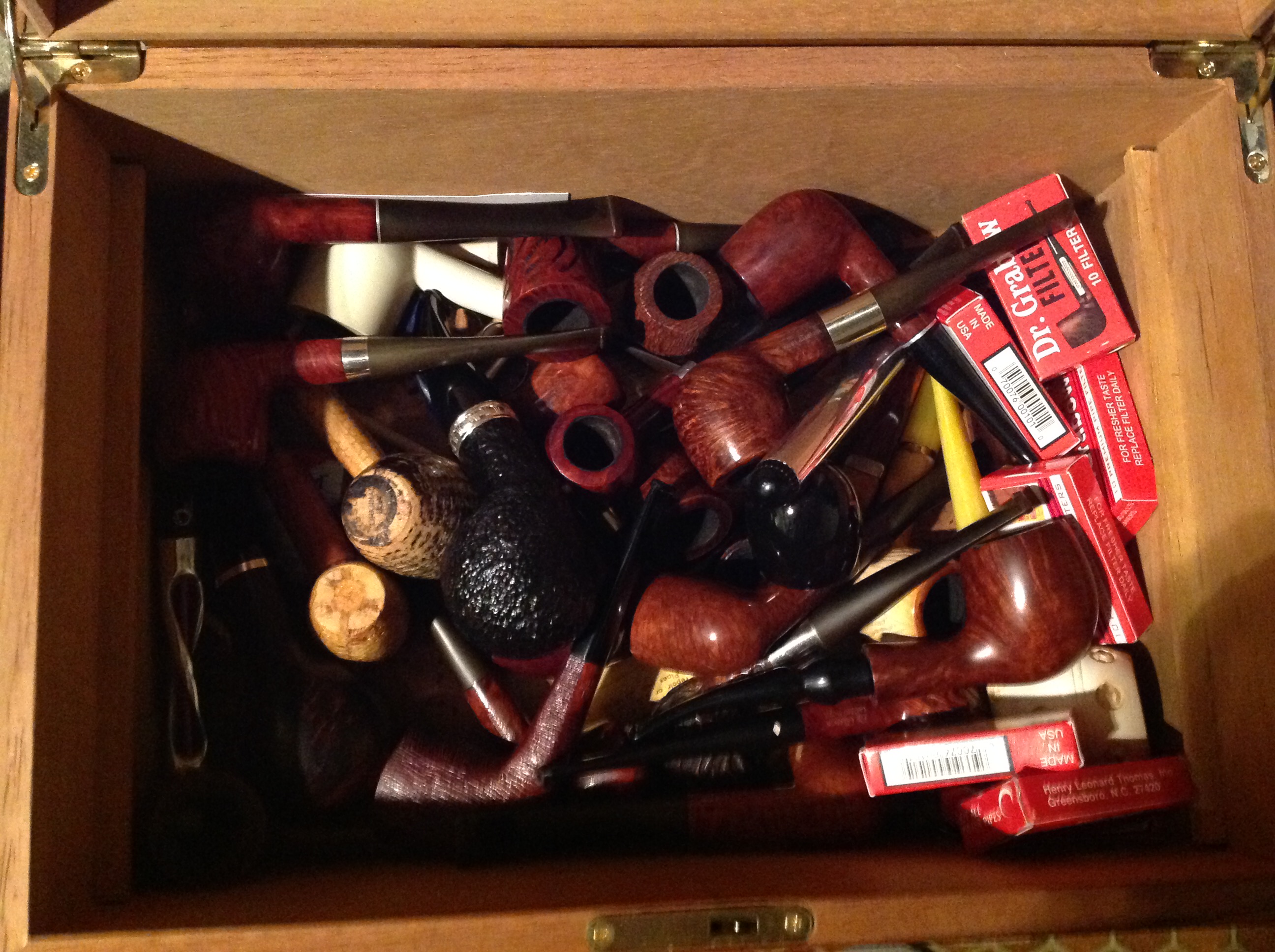 You have to? Please explain? Lol

My wife just does not like them left in random places all over the house. When she finds a partially smoked one on top of the fridge or something, it gets relocated to a tray on a table near the dining area. I walk by that on the way to the coffee pot in the morning, and so I can just finish it while I am on autopilot after getting out of bed and before getting some caffeine back in the system. This all works pretty well.

I do have a (8 pipe maybe) rack in the den, and there are typically a few on the table next to my easy chair. I have another rack at the office.

The rest of them stay in gallon ziplock baggies. They are "sets" that get pulled out to smoke. I will clean the last "set" and it goes in a ziplock.

That is the current system.

I do have a rack that holds 92 or something, and I kept pipes on that for a while.

You have to? Please explain? Lol

My wife, daughter and grandkids object to the odor of the Pipes, so I keep them in the Garage .