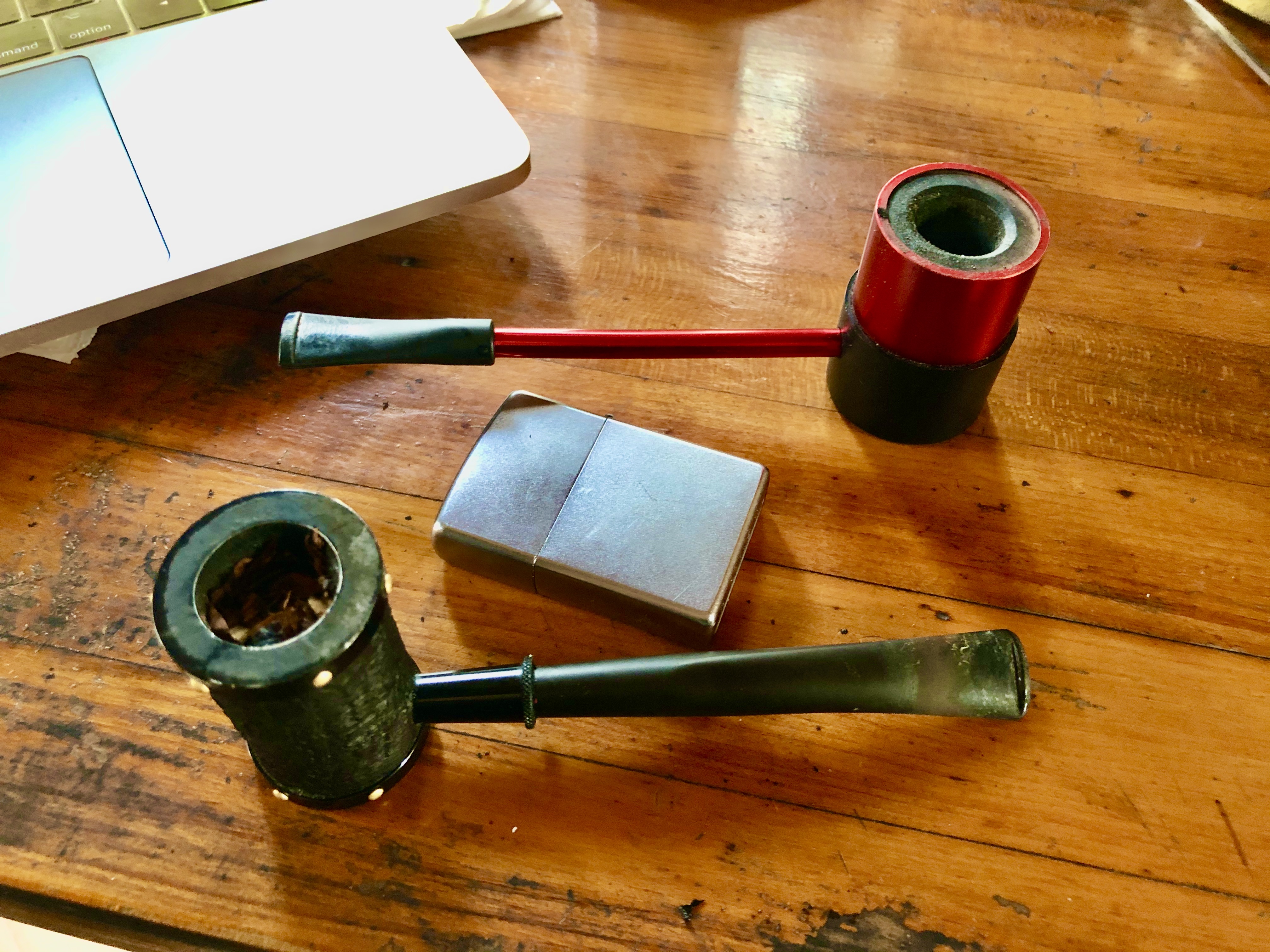 Nodding vs. Tsuge, or, Denmark vs. Japan, which seems to be an apt comparison in designing modern pipes as it does in dealing with modern pandemics.

It's a flat-bottomed briar bowl in a burnished metal casing, red in my case. The stummel, in matching red metal is not removable from the bowl. The stummel is also the stem, being 3 1/2 inches long. The bottom of the bowl is encased with some impact-and-scratch resistant polymer. It's not rubber. It's not soft. It's plastic that is smooth and comforting to the touch. The plastic doesn't cover the whole bottom of the bowl. Turn the pipe over and it's wood, with a cartoony caricature of Nording, himself, laser etched in the wood. The mouth piece bit is of the same plastic. The bit fits over the end of the stem The bit is soft in a clench, the bit cannot be removed from the stem. The stem is inserted into the bowl with firm pressure, requiring no twisting or turning. Friction holds the male and female ends together.

I don't know what this model of Tsuge is called. My Tsuge is a flat-bottomed briar with a metal rim on the top of and bottom of the bowl secured with brass tacks. The bottom metal rim totally encases the underside of the briar bowl; it is really more of a cap. The stummel is metal and unremovable, but it is only 1/2 an inch long outside the outer briar bowl wall. The stem is a push-in stem, into the stummel, all of one piece made of some kind of ersatz vulcanite. It's not vulancite as you know it but some Japanese equivalent. It ages well, oxidizes slowly, and is easily polished without needing any special tools beyond a handkerchief and regular use. The clench of this pipe is comfortable but firm.

Both bowls are two inches tall. The diameter of each pipe's bowl is also the same: 3/4 of an inch. I can't say if one is deeper than the other, I am smoking the Tsuge as I write this. I think the two bowls hold an equivalent volume of tobacco and that the draw holes are in equivalent locations so that moisture sinks and dottle traps are not an issue in either.

Comparing the two is mostly a question of aesthetics. I prefer the Nording only because it's stem is straight so when I put the pipe down between puffs, the business end never touches the table. I'm fastidious that way.

In the same ballpark, I have been considering an Eltang Basic
So Denmark for me

interesting pipes for sure

This post by avid liked by (total 2):
Middle Earth • Fr_Tom

Hey, WK, you ever consider a slab of agate to rest those on? I don't like my stems to touch surfaces either but there are various chunks of wood and stone to rest things on or to hold important papers in place here. A man like you not having something of this nature would surprise me. This piece has a good weight to it and felt bottom along with height sufficient to observe stem to surface distance safety. 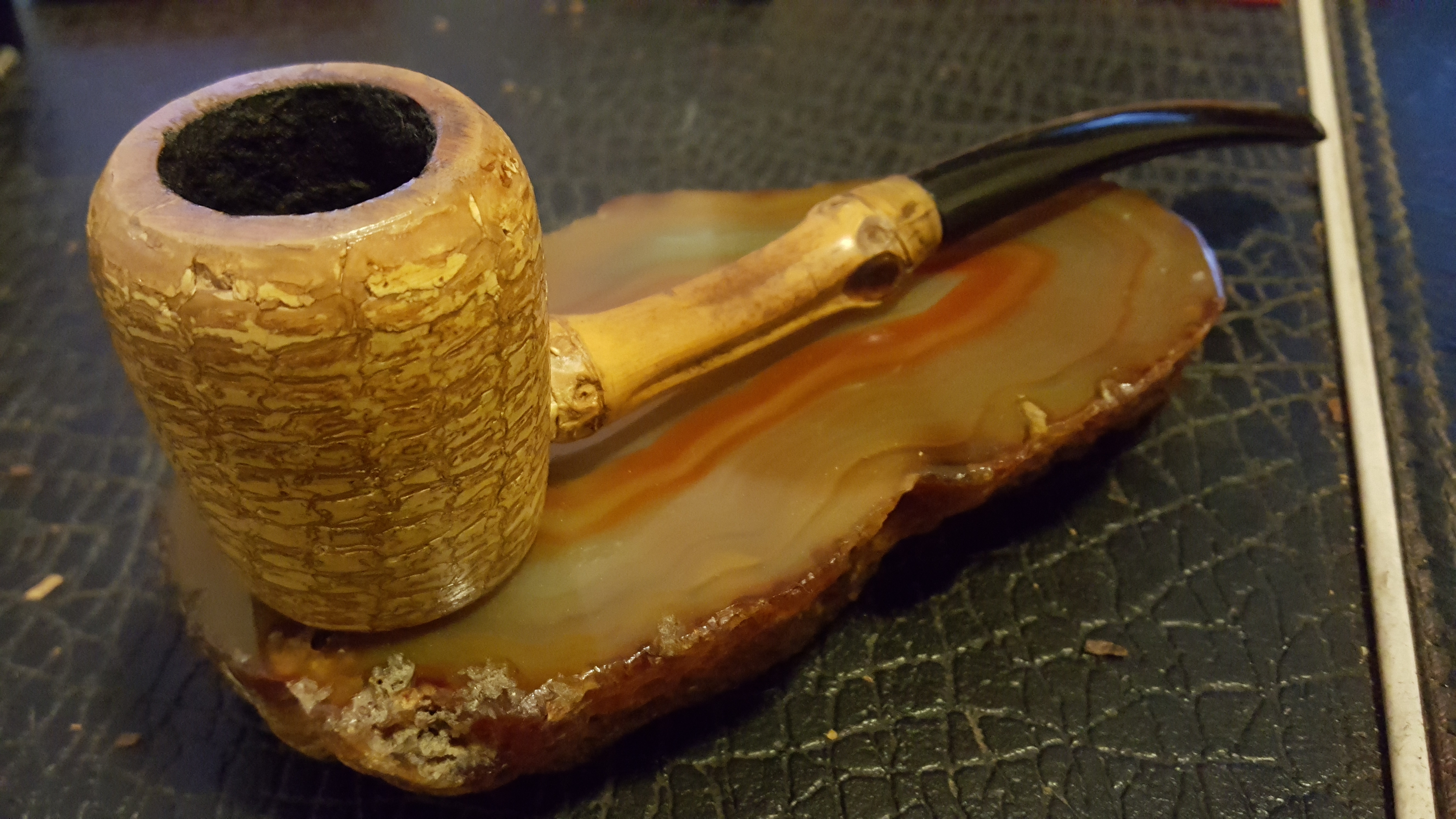 Thelonious monkfish wrote: ↑
Thu Mar 19, 2020 9:53 pm
Hey, WK, you ever consider a slab of agate to rest those on? I don't like my stems to touch surfaces either but there are various chunks of wood and stone to rest things on or to hold important papers in place here. A man like you not having something of this nature would surprise me. This piece has a good weight to it and felt bottom along with height sufficient to observe stem to surface distance safety.

I have tried all sorts of options. The problem is that I have so much clutter on my desk that the devices (if we can call a pipe stand a device) ether get covered over with newspapers and books for they get in the way when I need a little more space.

Plus, I do move around a lot, though to most people it seems I stay in place. I don't need a room peppered with pipe stands on every available surface.

When I discovered poker pipes, I never went back. I have always been more attracted to straight pipes over bent ones. I think both these statements reveal something important about me, the way I always wear a hat does, too.

I just like to put the pipe down where I want to put it down, without thinking about it. I'm not a germaphobe.

This post by Whalehead King liked by:
Middle Earth